Uptake of the Toronto Writers Collective has been swift here in Ottawa since its inception early last year. Enthusiasts made their way out through ice and snow to attend the very first Ottawa-based TWC training weekend in late January 2020.  Thanks to on-the-ground promotion by Mood Disorders Ottawa (MDO), so many people applied that TWC allowed more participants than usual: a full 14 trainees completed the weekend successfully. 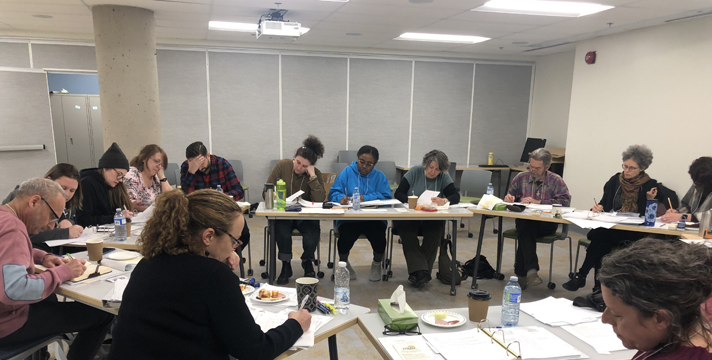 The training inspired participants to find their own voice and to help others find theirs. Reflecting on my experience, I wrote that “over the weekend I experienced my writer’s voice as an ally that I had not been aware of.  I watched others discover that ally as well: we moved from insecure, apologetic writers to confident, full-voiced ones.” On Saturday some trainees expressed insecurities about their abilities to lead workshops but by Sunday all declared themselves ready to go.

Fired up despite the dreariness of mid-winter Ottawa, many of us started facilitating a few days or weeks later. By the end of February three TWC workshops were meeting weekly, at Mood Disorders Ottawa (MDO) in Vanier, at the Centretown Community Health Centre and at the Sandy Hill Community Health Centre. Amazingly, all of these workshops transitioned smoothly online within weeks of the mid-March lockdown caused by Covid 19.  By early April, three Ottawa-based workshops were providing much-needed social and creative interaction through Zoom thanks to support from TWC headquarters and enthusiasm on the ground.

Our Sandy Hill Community Health Centre sessions were inspiring from the start. The first person to read their writing during the first session wrote a piece of such lyric beauty that she teared up after reading, saying “I didn’t think I had it in me.”

After a break in the summer, the Sandy Hill Community Health Centre offered a Tuesday afternoon Zoom TWC group from September 22 to December 8th,.Evaluations were very positive, with the majority of participants saying that they were very satisfied with the program and that it improved their sense of well-being. Comments included: “enjoyed meeting new people full of ideas and ready to exchange writings,” “I was losing my capacity to communicate with different people, and it helped me to reopen my empathy for others and confidence in myself” and “I feel alive in the group and more hopeful overall.” Co-facilitators, Julie and Janet will be leading the group again for another 10-week session starting on January 11th. To register or for more information please contact hpintake@sandyhillchc.on.ca.

The MDO group continued to meet on Monday night from 6:30 to 8:30 throughout the summer and fall, with participants logging in from visits as far away as Halifax and Manitoulin Island.

Sheila, co-facilitator of the MDO Monday evening workshops and creator of an MDO journaling group called Jot-a-Lot and, reflected that “the Writer’s Collective has changed my writing to be more positive, it helped me find new perspectives.” Now, she says, she can still write about difficult experiences in her journal but end on a positive note. “That’s made a huge difference for me in my day to day life,” she says.

Sharon, her co-facilitator and the initiator of the Tell Your Story group at MDO, says that she looks forward to facilitating TWC every week. “TWC has provided me with an opportunity to express myself on a different level and relate in a new way to others and myself” she says.   “I never would have imagined that I could write the things I have written and it’s awesome to witness the growth in the writing and the personal growth of the participants.”

After a brief break for Labour Day, MDO carried on their popular Zoom TWC workshops through to December 14th.  There were often more than fifteen participants, making it necessary to create breakout rooms. An additional facilitator, Basil, joined the team after obtaining TWC training in October.  The workshops will resume on  January 11.  If you would like to join please contact info@mooddisordersottawa.ca with subject line “Interested in TWC.”

Trudy, co-facilitator of the Centretown workshop on Tuesday mornings with Carrie, was inspired by the community that quickly developed through the workshops.

“It was a joy to feel the diverse group of nine participants coming closer and closer together over several weeks,” she said. “They are not only awesome writers but insightful and encouraging commentators on each other’s work.”

The Centretown Community Health Centre workshops took a summer break then in the fall offered an 8-week session and one “pop-up” workshop. The workshops were very well attended and received a lot of positive feedback says coordinator Natasha Beaudin, adding that facilitators Carmel and Carrie “are doing a great job.” The next eight-week daytime session starts through Zoom on January 8th. Please contact nbeaudin@centretownchc.org if you are interested.

The TWC has now received a grant from the Ottawa Community Foundation to add further training and workshops in Ottawa.  Early in the New Year there will be another Zoom-based facilitator training opportunity, for which Julie of the Sandy Hill Community Health Centre is actively recruiting bilingual volunteers. The Centre hopes to offer a French-language TWC workshop in Spring 2021. If you are bilingual and interested in facilitating, please contact hpintake@sandyhillchc.on.ca.

Ottawa expects to continue to play a leading role in expanding the TWC beyond the GTA. The Toronto Writers Collective is definitely going to have to change their name soon!

We look forward to welcoming to our growing Writers Collective of Canada community in Ottawa.